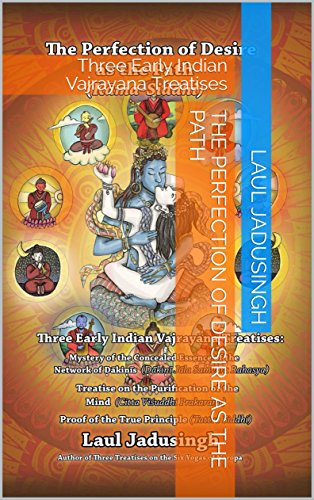 The three treatises translated herein from the original Sanskrit represent the earliest phase of Vajrayana expository literature. A principle expounded in common by all is the utilization of the special skillful means (upaya-kaushalya) of Vajrayana to transmute afflictive emotions (klesha), especially desire (kama), into Great Bliss (mahasukha) and enlightenment (bodhi). This principle has been called Kama-Siddhi, the "Perfection of Desire" in the Cakrasamvaratantra and cited in Anangayogi's Dakinijalasamvararahasya, the first treatise translated in this volume.

The dates of composition range from the 2nd-to 8th centuries CE. Their authors, Anangayogi (Anangavajra?), Aryadeva and Shantarakshita were scholar-adepts of the latest phase of Buddhism in India which recognized the Three Vehicle (Tri-yana) schema of Sravakayana (Disciple Vehicle), Paramitayana-Mahayana (Perfection Great Vehicle) and Mantra-Mahayana/Vajrayana (Mantra Great Vehicle/Adamantine Vehicle).

If the author of our first treatise "Mystery of the Concealed Essence of the Network of Dakinis (Dakinijalasamvararahasyam) is identical with Anangavajra, author of the Accomplishment of Determination Wisdom and Means (Prajnopapayaviniscayasiddhi), the treatise must have been composed in the early 8th cent. CE as he is recognized as the being the second in the lineage of the 84 Great Adepts (mahasiddhas) of Vajrayana who flourished from the 8th-12th centuries.

Unlike the two other treatises translated herein, the "Dakinijalasamvararahasyam" does not offer logical-epistemological defenses of the Tantric principles but resorts to the analogical type "proofs" found in the Root Tantras (mulatantras) such as the Hevajra and Cakrasamvara. It excels, however, in decoding terms of the Tantric code language (sandhyabhasa), a feature that should be of great interest to students of the Vajrayana. Its most important feature, moreover, is the significance of its title Dakinijalasamvararahasyam, rendered "Mystery of the Concealed Essence of the Network of Dakinis". In the introduction, I have devoted great effort to decoding its meaning.

The next composition, "Treatise on the Purification of the Mind" (Cittavisuddhiprakarana) is ascribed to Aryadeva, the direct disciple of the illustrious Dialectician and Madhyamaka philosopher Nagarjuna, himself reputed to have been a great adept of Vajrayana and author of Tantric treatises such as the Five Stages (Pancakrama), a systematic exposition of the yogas of the Guhyasamajatantra, the first of the Anuttarayoga class of Tantras. To Aryadeva is also attributed the authorship of a number of expository treatises on the Guhyasamaja Tantra, chief of which is the Caryamelakapradipa, "The Lamp of the Integration of Practice", an in-depth exposition of the yogas of the Guhyasamajatantra. Both the Cittavisuddhiprakarana and the Caryamelakapradipa are much esteemed and cited. A significant feature of Aryadeva's Cittavisuddhiprakarana is its employment of more rigorous logical proofs of the Tantric principles. Its composition can be dated to the 2nd century.

Our last treatise, The Proof of the True Principle (Tattvasiddhi) is ascribed to the illustrious Shantarakshita, author of the magisterial Tattvasamgraha, "Compendium of True Principles", who, in conjunction with Padmasambhava, was instrumental in laying the foundations of Buddhism in Tibet. Its composition can be assigned to the 8th cent.

If Aryadeva's treatise can be said to begin the trend of proffering logico-epistemological rationalizations of the principle of Kama-Siddhi, Shatarakshita's Tattvasiddhi is the culmination in this direction. Its proofs are as rigorous as those offered in his magnum opus the Tattvasamgraha. In addition, its exploration of psychodynamics is extraordinary.

The Introduction explores select themes such as Kama-Siddhi in depth and analyses key-terms. The Sanskrit texts, Devanagari and Romanized, have been included in appendices.

APA handbook of clinical geropsychology, Vol. 1: History and status of the field and perspectives on aging - Orginal Pdf

An Introduction to Performance Analysis of Sport - Orginal Pdf